The recently renovated penthouse at North Shore Towers in Cairns, Queensland, features a breathtaking list of glass and glazing ‘firsts’, including a cantilevered glass pool and spiral glass staircase.

Few projects have the capacity to leave an observer awestruck, and even fewer become instant classics, but the mutli million dollar renovation of the South Penthouse in North Shore Towers, overlooking the blue waters of tropical Cairns, sets new standards of glass and glazing craftsmanship, design creativity and engineering boldness.

This renovation, with glass and glazing provided by local firm John Hyde Glass and Aluminium (JH Glass Innovation Pty Ltd), took 18 months to complete, and was a finalist at the AGGA 2015 Glass and Glazing Design Awards for best residential project (over $20,000); and winner of the 2015 Glass and Aluminum Association of Queensland (GAAQ) award in the same category.

Every glazed element of this project is innovative – all features were developed according to exacting design criteria, pushing the limits of engineering workability and leaving more than a few tradespeople with goose bumps along the way! At every turn, trade contributors banished off-the-shelf convenience in favour of customised solutions and a desire to bring the owners’ personal vision to reality.

The principal windows, for example, each measuring 2,200mm high x 4,200mm wide and weighing 400kgs, had to be craned to the 14th-level penthouse at opportune moments to avoid wind interference and allow for safe installation – a process that took many anxious days, according to John Hyde, Managing Director of John Hyde Glass & Aluminium. All glass balustrades used 17.04mm Sky Glass requiring no top handrail.

Perhaps the most stunning features of the penthouse are the extraordinary cantilevered glass pool, and the sparklingly brilliant spiral glass staircase. Both of these constructions are unique in Australia, and both were the result of painstaking research and commitment.

The total suspended weight of the pool is 16 tons, all held in place by four panels of 82.84mm clear laminated safety glass.

“We were lucky to have Chas Gianarakis from C.M.G. Consulting Engineers working on the project,” John says. “He’s an amazing guy, probably one of the best engineers in the country and one of the most sought after because he’s a lateral thinker; whatever the computer spits out, he won’t take that for gospel.”

John says the pool came to fruition thanks to some good fortune, involving some strong steel beams extending back into the building from the pool surrounds, which served as anchors for the new work. “We actually procured the original plan and it showed there were two central pillars that went the full height of the building and were going to sit underneath those two beams – if they were a metre or two to the side, the pool wouldn’t have happened as it did.”

Once weights and loads and glass specifications had been determined, John explains, steel components were made locally, and the decision made to use glass rather than polycarbonate or acryclic. “There was a lot involved – even the polished stainless steel at the top is actually a structural channel that ties it back to the building as well. When I look back at it now, I think it’s probably overengineered, but because it had never been done we couldn’t take any chances.”

“The other thing that makes it special is that there aren’t many places where there would have been access to get the cranes we needed to make this work,” John explains. “We needed 150-200 tonners to crane these panels up, so there were a lot of things that had to come together. There were certain times when there was some trepidation, you might say, but I wouldn’t ask anything of the guys that I wouldn’t do myself!”

Filling the pool with water was itself nerve-wracking, John notes, but thankfully there were no structural deviations following the addition of so much weight.

Equally stunning is the glass and steel staircase, complete with curved balustrading, which serves as a centerpiece of light and delicacy within the penthouse, setting the scene for all the residence’s other glazed elements. A mirror-polish stainless steel column forms the backbone of the staircase, which is a stand-alone cantilevered installation. All holes were precut based on CAD input: “There are no fixings holding the stringer up, it’s all hanging off its own weight affixed to the floor and the landing, which made it very special,” John says. “We had those stairs 85% finished, and even then I wasn’t sure if it was going to work.”

Amazingly, just a few metres away from this inspiring structure are other similarly jaw-dropping pieces, including a 7,000mm saltwater fish tank (the largest in an Australian residence), as well as a mirror-backed bar, backlit with fully programmable LED lights that can change to any colour of the rainbow and alter the mood of the conjoined shelving and vortex water features.

“They’re only 50mm wide,” John explains, “so there’s not a large volume of water inside.” Some 50 air hoses deliver air into these tank-walls, and the amount of bubbling can be adjusted. Surrounding walling opens out to offer access in case there is ever a problem with the bubble walls – “It took several weeks just to fabricate the surrounding cupboards that encase those bubble walls.”

The staircase, bar, bubble walls and practically every other customized feature of the penthouse are linked to custom-designed lighting and other automated devices, all controlled from an iPad or smartphone. John says the programmability includes the ability to change colours, activate or switch off lights based on sensors, or even link effects to sound systems and entertainment units.

It is testament to the brilliance of the design that cabling is strung out amidst so much glass without being noticeable.

Overall, the entire penthouse renovation is a billet doux to glass – a homage to its power as a resilient but delicate material, and simultaneously a reminder to builders of its strength and engineering adaptability.

In commending the project for the abovementioned GAAQ design award, the judges had this to say: ‘This residence exemplifies all the fine qualities of glazing in terms of reflectivity, transparency, lightness and texture… Detailing is of the highest level and there has been careful consideration of how the glazing can complement the internal spaces without distracting from an amazing aspect. The coordination of lighting, water features, internal finishes with all the various elements of glazing should be commended.” 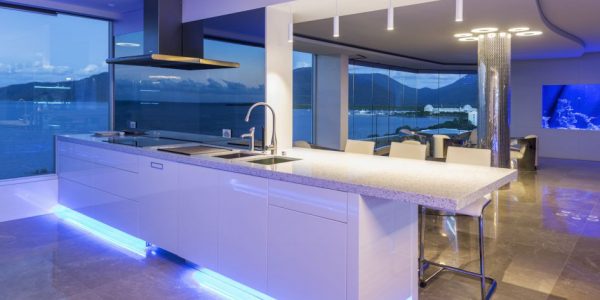 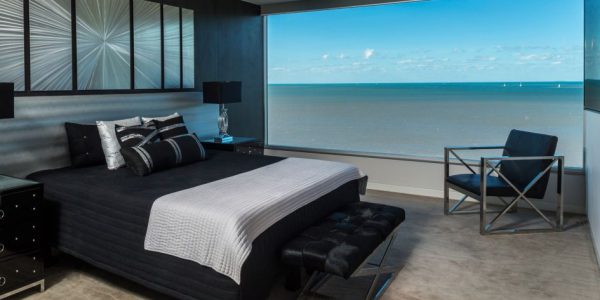 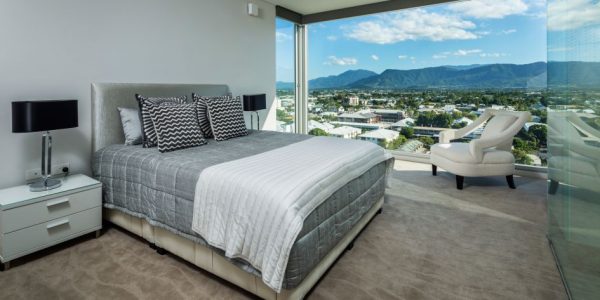 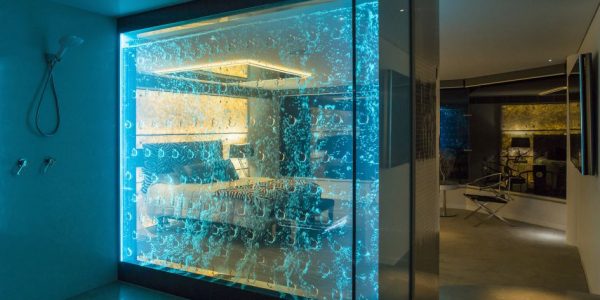 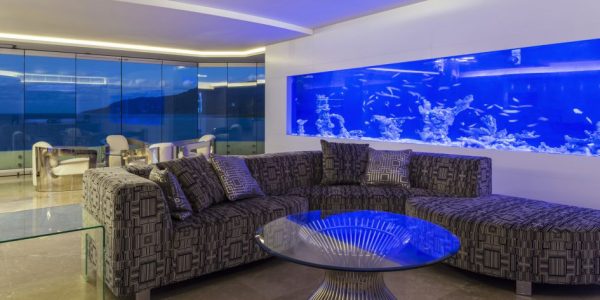 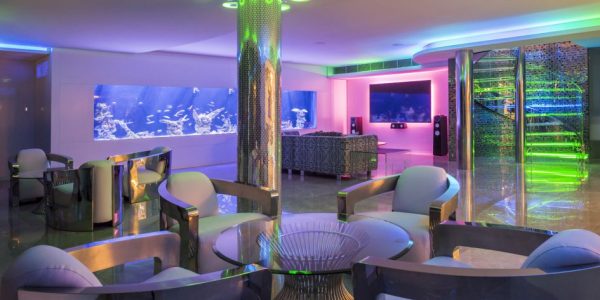 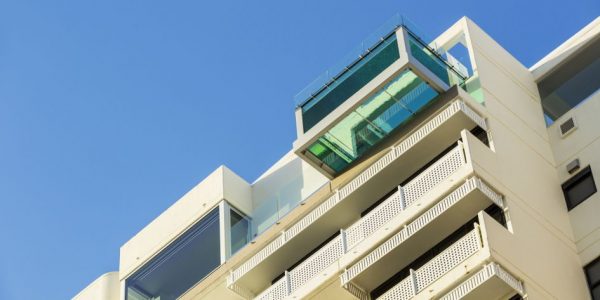 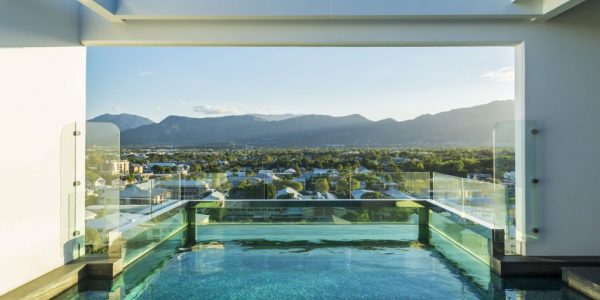 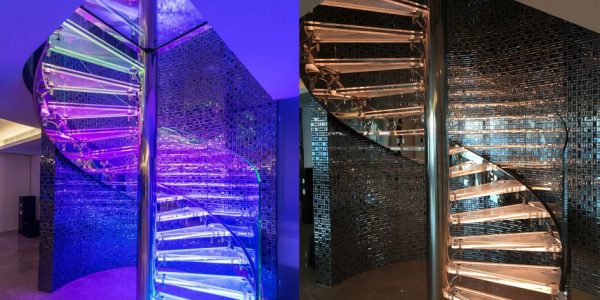 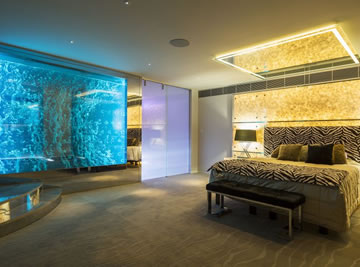